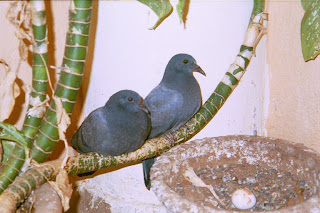 They're almost, but not quite, grown enough to fly off into distant trees. These baby pigeons, my little 'grandchildren', were hatched in an empty flowerpot in our apartment balcony. I don't know why their parents chose this place in a tall building in the middle of the city. But they took little time to make themselves a part of our family.

They stepped into the balcony, pecked at invisible mites in our flowerpots, and then took tentative steps into our rooms. Fluffing their feathers and cooing indignantly at our attempts to shoo them off, these interepid birds went boldly where no pigeon had gone before.

We watched the parents ( I'm sure the parents took turns at it. Very egalitarian birds firmly practicing the equality of the sexes) patiently hatch their brood of two eggs. Around three weeks later, scruffy, almost blind fledgelings cheeped and flapped their bald apologies for wings. The parents constantly fed and tended them until the feathers sprouted and the babies stepped out of their pot onto the balcony floor. Then, they hopped on to a nearby potted plant.

That was when more pigeons got wind of this safe haven. Another pair deposited an egg in the now empty pot. In this picture, the babies look wistfully at their cozy little home, now occupied by a freshly laid egg. These youngsters can't quite fly off yet, but they soon will.

We get other wild visitors to our balconies sometimes. There are several still uncut trees in the vacant land next to our apartments. Monkeys sometimes scamper through the branches in search of food and, um, well, monkey business.

It's easy for these creatures to hop from balcony to balcony till the topmost floor of our building and run off with fruits and shiny objects. One monkey entered an apartment and found no food on the dining table. He then opened the fridge and after a hearty and most messy repast, he spotted a stuffed toy monkey made by the lady of the house. He fell in love at first sight with the toy and eloped with it. The monkey was last seen on a treetop caressing the toy monkey with complete, unquestioning devotion.
Posted by monideepa sahu at 11:51 AM

Ah Moni, lovely! Such a joy to see new life finding it's way, such pleasure to have all these visitors. Your home sounds like mine. I've watched a family of guineas fledging, started with 17 chicks and we're down to 11, which is not too bad going given the voracious appetite of the sparrowhawk. Courtesy of all the peanuts I put out, we not only have a fine brood of guinea fowl but we also have an overabundance of feisty, white chested squirrels. The squirrels, like your monkey, have all but moved in and can be found perching on the furniture demanding food. Methinks the menagerie may be a tad out of control!

Where do you live, Atyllah? Would love to drop by for a visit and say hi to your squirrels. Squirrels are ineresting critters. There are some in my son's college campus. Students like to gather under the majestic old trees to share lunch. Some squirrels come within inches of students and beg for moresls.

Do you live in the countryside? We are in the heart of a huge city, population over six million! So our visitors are quite a surprise, at least to boxed in city dwellers like us.

I'm in suburbia and the squirrels have become really tame - so much so that they're becoming a pest. The part of suburbia I live in is heavily treed and near a pine forest - so it's squirrel heaven :-)