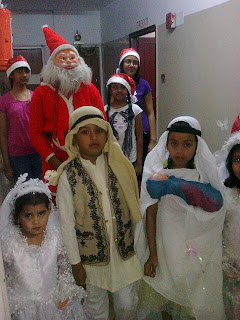 Neighbourhood kids of different faiths sang carols at our doorstep celebrating Christmas and welcoming 2012 with the Spirit of unity. Here are the cuties dressed as angels, magi and all. Taking a cue from them to wish all friends a wonderful Christmas and a fabulous 2012
Posted by monideepa sahu at 12:14 PM No comments:

Reaching out beyond the void

Title: The Empty Space
Author: Geetanjali Shree
Translator: Nivedita Menon
Publisher: Harper Collins India
Pages: 260
I recently had the pleasure of reading The Empty Space, a powerful novel about death, life, and the empty spaces in-between.
What I liked best about this novel was the positive strength of the surviving child. Also, the translation is beautifully done. My detailed review is publsihed in:Sunday Herald
Posted by monideepa sahu at 1:20 PM No comments:

Indian minature paintings fascinated me from the first time I set eyes on them as a child in a lovely book in Lady Irwin School library. In later years, my little son and I would spend many holidays exploring Mumbai's Prince of Wales Museum. Their fabulous collection of Indian miniature paintings was among our favourite haunts. These intricately painted gems were marvellous down to the minutest detail. So many schools, each with their distinctive styles; so many wonders packed into tiny spaces. Who created them? What inspired them? What were their lives and times like?

Many of our artists of yore are nameless and faceless. While some of their beautiful creations have survived the ravages of time, little is known about these individual artists. I recently attended the inaugural lecture for Tasveer Foundation’s lecture series by eminent art historian Prof B N Goswamy, who threw fresh light on this beautiful art form.

From the 17th to mid-19th centuries, artists of the Himalayan foothills or pahari region produced exquisite miniature paintings, which are a vital part of India’s artistic heritage. Foremost among them was Nainsukh, whom Prof B N Goswamy ranks among India’s finest miniature painters. Working in the 18th century, Nainsukh left behind a treasure trove of portraits, court scenes, hunting scenes and glimpses of daily life. In the 100-odd surviving paintings and sketches attributed to him, we see a deceptively simple world rife with complex subtleties. With an incredibly light yet masterly touch, Nainsukh’s paintings breathe life into magical and intensely human moments from times long gone.

Nainsukh was born in Guler, a tranquil place in the hills, and created many of his paintings there as well as in Jasrota. He painted in a fresh, realistic and ethereal style, marking a change from the earlier heritage of rich, bold colours, robust human figures and breath-taking stylised language of art. Nainsukh’s work is marked not by emphatic accents, but by soft, delicate tones.
They appear simple at first glance, but a closer look reveals subtle nuances brought out through skillfully executed precise lines. Nainsukh captured the beauty of the people and their emotions, and the verdant hills where they lived.

My detailed essay on Nainsukh can be read in Sunday Herald
Posted by monideepa sahu at 12:27 PM 4 comments: